‘Stop the War on Migrants’ is a campaign against the current EU border and migration policies. It focuses on the way the EU militarizes border security, both at its own (external) borders and in third countries, and the arms and security companies, such as Airbus and Thales, lobbying for and profiting from this. No border security, detention and deportations, but safe routes, good shelter and working on removing the causes that force people to flee. 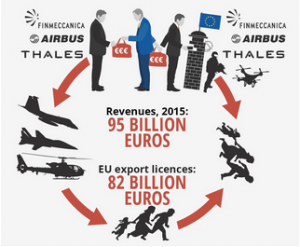 The EU is waging a war against migration, which is also at the heart of EU foreign policy. Migration is perceived as a security threat, instead of a humanitarian and political problem. The EU responses to this ‘threat’ is to militarize border security, both at the external borders of the EU and in third countries, to stop refugees already on their way towards Europe. This includes sending armed forces to the borders, erecting security fences (with all kinds of surveillance and detection technology), increasing use of autonomous systems (drones etc), use of military means by border police, (para)military Frontex operations in the Mediterranean, Operation Sophia before the coast of Libya, with support of NATO, and training and providing equipment to (para)military border guards in third countries.

The European military and security industry has been very influential in setting this discourse of a migration-security nexus and shaping the policies to respond to this. Large arms and technology companies, in particular Airbus, Thales, Leonardo and Indra, as well as lobby organisations, such as the European Organisation for Security (EOS), have been very effective in lobbying the EU. Through countless meetings with EU officials, round tables with participation of EU commissioners, producing lobby papers and so on they have been successful in pushing their agenda. This is very visible, for example, in the way the funding for security (and from now on military) R&T by the EU is almost completely based on advice papers from EU installed consultation bodies, in which representatives of arms companies and military research institutions played a leading role.

Next to growing EU spending on own border security measures, the EU funds border security purchases by EU member states and by third countries, mainly in Africa, for which development cooperation budgets are plundered. The military and security industry is the most important beneficiary of these expenses. They sell everything from ships and helicopters to surveillance and (bio-metric) identification technology, in a growing border security market. Airbus, Thales, Leonardo and Indra are again important players in this field.

Meanwhile, the EU turns a blind eye to both its own role in causing the reasons people are forced to flee and the horrific consequences of its policies. EU international trade policies come down to exploiting the global south and the EU is ever more cooperating with, and thus legitimizing and strengthening, human rights abusing regimes in third countries, especially on combating migration. Weak environmental policies fail to halt climate change, which will be an ever more important cause of new crises that force people to leave their homes. EU and NATO military operations in Afghanistan, Iraq, Libya and Syria have contributed to the chaos and violence in the Middle East and North Africa. As has been done through allowing the export of arms, for over 80 billion euros from EU countries in the last decade alone, to this region, where they feed human rights abuses, internal conflicts (Iraq, Libya) and wars (Syria, Yemen). 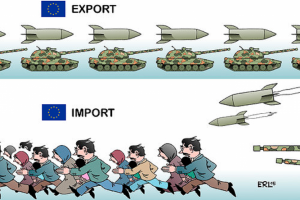 The boosting and militarization of border security has lead to attacks against refugees, for example by Hungarian, Bulgarian, Greek and Spanish border guards. It also forces refugees to look for other, often more dangerous migration routes. After the Turkey Deal and the subsequent almost closure of the so-called West Balkan migration route, many refugees diverged to Libya to try to get to Italy. A known more dangerous route, this has lead to much higher death rates of people dying in the Mediterranean. EU policies put refugees in danger of deportations to unsafe countries, of (prolonged) detention in Europe or in third countries, for example in the hell of Libya, and undermine the economic and social development of non-EU-countries, especially in Africa. And by depicting refugees as security threats the EU feeds the rise of nationalism, racism, xenophobia and Islamophobia in Europe. Extreme right politicians ride on the anti-immigration-waves stirred up by official policies and language by the EU and all its member states.

Text continues beneath the video: Airbus profits from war and refugees

Airbus is a Transeuropean aerospace and military company. It is a merger of German, French and Spanish companies, and most production still takes place in those countries, while their governments together own over a quarter of the shares. For tax reasons the headquarters are in Leiden (The Netherlands) however. Airbus is the second largest arms producer of Europe and the seventh largest in the world (2016). It’s main military products are helicopters, fighter jets and missiles. Airbus is also involved in nuclear weapons production and maintenance.

The company sells arms all over the world, including to countries in conflict, authoritarian regimes and human rights violators. It is also a major player in the border security market. It sold helicopters for border security to Belarus, Bulgaria, Finland, Germany, Lithuania, Romania and Slovenia. The purchases by Finland and Romania were funded by the EU. Airbus’ border security division, now a separate company called Hensoldt, sold border security systems to Romania (again with EU funding), France, Spain and Bulgaria. Together with Israel Aerospace Industry (IAI) Airbus developed the Harfang UAV (drone), which it promotes for border security work.

Airbus is a member of the two most prominent military and security industry lobby organisations in the EU: the European Organisation for Security (EOS) and AeroSpace and Defence Industries Association of Europe (ASD). The company itself has twelve lobbyists stationed in Brussels, and met with the European Commission at least 119 times since November 2014.

Thales is a French arms and technology company. It is the fourth largest arms producer of Europe and the tenth largest in the world (2016). Dutch arms company Hollandse Signaalapparaten (HSA) has been part of Thales since 1990 and is now called Thales Netherlands. It’s main production facility is in Hengelo (Overijssel), while it also has branches in Delft, Den Haag, Eindhoven and Huizen. Products include radar, fire control systems, cyber security and biometrics. The Thales Group in general produces a broad range of arms, including drones, small arms and armored vehicles. It is also involved in nuclear weapons production and maintenance.

Thales is also very active in electronic ID-management, it sold systems for this to Uzbekistan, France, Morocco, Kenya, the UK and seven other, unnamed countries in Africa. In the course of 2018 Thales will take over Gemalto, a Dutch bases digital security and bio-metrics company. Customers of Gemalto’s bio-metric passports and ID-cards include Algeria, Cote d’Ivoire, Lebanon, Moldova, Nigeria and Turkey.

Like Airbus, Thales is a member of lobby organisations EOS and ASD. The company itself has six lobbyists stationed in Brussels, and met with the European Commission at least 18 times since November 2014.