4 August 2022 – From Monday 8 to Sunday 14 August the No Border Camp 2022 will take place in Rotterdam. Hundreds of international activists will gather for a week of actions, meetings, workshops, discussion and culture in the context of the struggle for a world without borders and freedom of movement for all. The international ‘Abolish Frontex’ campaign is an important spearhead of the camp.

The No Border Camp, including its actions and workshops, will call attention to the repressive and militarized Dutch and EU border and migration policies, at a time they reach new heights with walls, racism, violence and push-backs at and beyond the borders. From the inhumane treatment of asylum seekers in Ter Apel to EU cooperation with non-EU-countries to stop refugees before they can reach the EU external borders, and from the situation of LGTBQIA+-refugees in The Netherlands to the consequences of the Russian invasion in Ukraine. Participants to the camp will also discuss issues such as movement building and strategy.

Abolish Frontex is a decentralized and autonomous network of at the moment some 130 groups and organizations from EU countries and beyond. The aim of Abolish Frontex is not to reform or improve EU border guard agency Frontex, or to replace it with more of the same. But rather to target the policies and system that keeps Frontex in place. Abolish Frontex is working towards ending the EU border regime, dismantling the border-industrial complex, and building a society where people are free to move and live.

The camp is organized by a coalition of activists from several groups in The Netherlands, and follows the previous No Border Camps in Rotterdam (2013) and Wassenaar (2019). The camp in 2019 ended with the occupation of the roof of the NATO Communications and Informations Agency in The Hague, to protest the role of NATO in forcing people to flee and its involvement in border security in the Mediterranean.

The exact location of the camp will be announced on Monday on its website.

END_OF_DOCUMENT_TOKEN_TO_BE_REPLACED

On May 15 the Swiss population will vote in a referendum on ending its financial contribution to the EU border guard agency Frontex. We will use this hopeful development as an occasion to highlight and protest against the Dutch involvement in Frontex. Join us for a walk along and public actions at several locations connected to this involvment in The Hague. END_OF_DOCUMENT_TOKEN_TO_BE_REPLACED

Stop the War on Migrants joins the callout for the demonstration ‘Peace for Ukraine’ on Sunday, 3pm at the Dam in Amsterdam. We subscribe to the joint callout text:

‘We stand with the people of Ukraine. Lives are lost, people, houses and streets are bombed and people are fleeing. We urge the government of the Netherlands & the EU to hold Russia to account by imposing far-reaching sanctions on Putin’s regime, to do all you can to de-escalate and to prevent the loss of life. EU, commit yourself to peace and de-escalation. Protect human rights and lives, not money and power!
Together against war, for refugee support and for peace and freedom in Ukraine!’

We bring our own point of view to the demo:

We also condemn the role of NATO, the EU and Western countries in fueling tensions in the last months and through its expansive policies of the last three decades. We see no role whatsoever for NATO, or other Western-led military coalitions, in mingling in this conflict. We reject both Russian and Western imperialism, which we have seen destroy countries like Iraq, Afghanistan and Syria.
END_OF_DOCUMENT_TOKEN_TO_BE_REPLACED 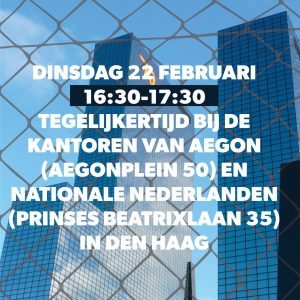 Join the protest against making profits from the construction of the Polish border wall against refugees. Demand that insurance companies Aegon and Nationale Nederlanden divest from construction companies Budimex and Unibep.

END_OF_DOCUMENT_TOKEN_TO_BE_REPLACED 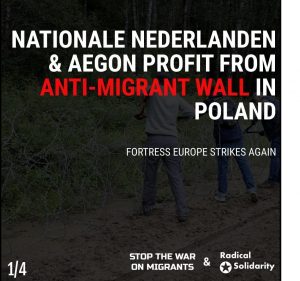 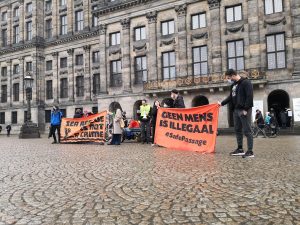 On Saturday 18 December, International Migrants Day and an action day of the international Abolish Frontex campaign, we blockaded the car gates of the Koningin Máximakazerne, a location of the Koninklijke Marechaussee (KMar – military police) near Schiphol airport. This location is home to the Border Security Training Centre, which is also a Frontex training location. On top of this the KMar itself is responsible for border security and control in The Netherlands and for deporting people on the move. KMar-personnel also takes part in Frontex operations and is involved in border externalisation efforts, by training and supporting border authorities in non-EU-countries, such as Libya, Niger and Lebanon.
Early in the morning, we blockaded the entrance gates of the base while others unfolded banners. While we started publishing our action online and approaching press, hyped up KMar officials immediately came out and violently forced two of our comrades out of one lockon by pulling on their arms and hitting, suffocating, and kicking them. Comrades who tried to get close where violently pushed away. The two were then arrested and brought to holding cells at the police base.
All the more determined to go on with our action, we continued our blockade and let the KMar know what we think about their work for many more hours. It is clear that the military police is key to upholding oppression, exclusion and racism. If we want to fight Frontex and the system it represents, we have to take action at the centres of power. After a successful action, eight more comrades got arrested. Everyone else moved to the near detention centre, which amongst other things is used to jail undocumented people, and did a quick noise demo to show solidarity with the detained persons.
The action put the spotlight on Frontex and the participation of The Netherlands in its operations and training, including of its new own armed border police force, the Standing Border Guard Corps. It was part of an international action day which saw over 40 actions in 13 countries in Europe and Africa demanding to Abolish Frontex and end the EU border regime. In the afternoon, at Dam Square in Amsterdam a few dozens of people demonstrated in support of the protesting Refugees in Libya. They collected signatures for a petition demanding the Dutch government to evacuate these refugees from their unlivable situation in front of the UNHCR office in Tripoli and an end of the cooperation with Libya to stop migration towards Europe.
On Saturday night people did a noise protest at the police base to support the arrestees and show them that they were not alone. Between Saturday and Monday, all the arrestees got released.
This will definitely not be our last action against Frontex, we only just started. We will continue our fight to Abolish Frontex and against borders and border profiteers, for freedom of movement for everyone! No borders, no nations, stop deportations!
Pictures by Jan-Kees Helms and !Koekblik! 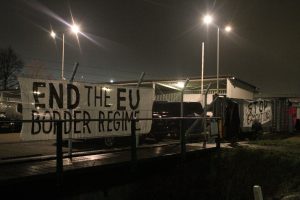 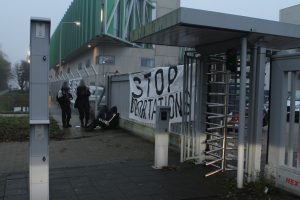 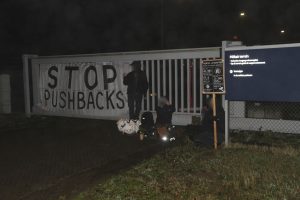 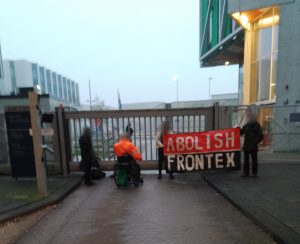 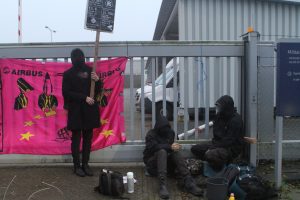 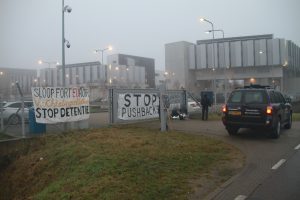 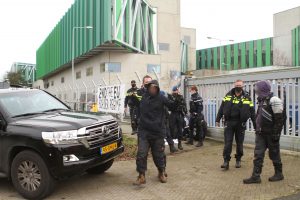 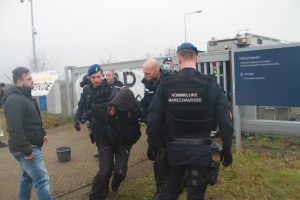 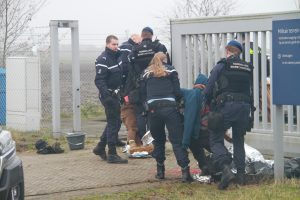 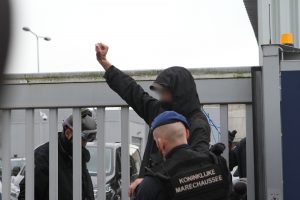 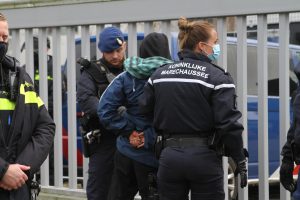 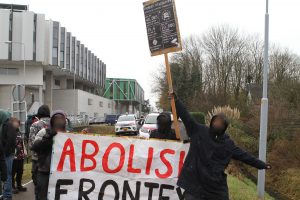 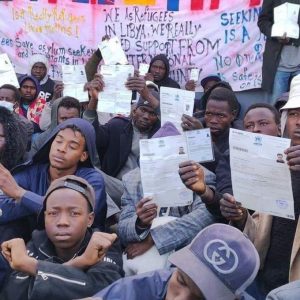 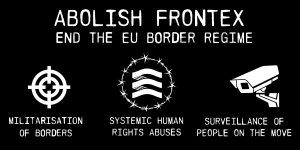 Come to one of our info talks learn to more about Frontex and the international Abolish Frontex campaign!

Frontex is the European Union’s border agency and is a key actor in enforcing the EU’s deadly border regime. It is responsible for systemic human rights violations through its operations; deportations; and cooperation with repressive regimes in third countries. In the last fifteen years, Frontex has grown in power and budget enormously and it is now the best paid agency of the EU.

This has to stop. Frontex is an essential part of the EU’s inherently racist, colonial and capitalist border policies and contributes to the horrific way in which migrants are treated. It is not enough to reform or improve Frontex, or to replace it with more of the same. It’s time to abolish Frontex and the system it represents. Come to our info night to learn more about Frontex, the international Abolish Frontex campaign and join the struggle!