On the 9th of December, people decorated offices of the IND in different cities in the Netherlands as part of the international Abolish Frontex action days. With this action they ask for attention for the horrendous situation of migrants in The Netherlands and EUrope in general. 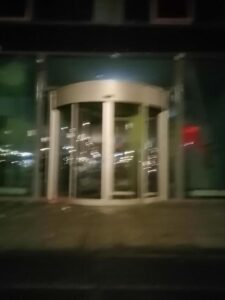 The IND is responsible for the processing of asylum claims in the Netherlands. They make it incredibly hard for people to get asylum by not believing their stories and making uninformed decisions about people’s lives. Not only is the IND active in The Netherlands, they also take part in so-called migration missions in third countries, where they closely work together with Frontex to ensure that people do not even reach EUrope but are stopped in other countries already. Below, some photos can be found of the action.

The action is a part of the International Abolish Frontex campaign. Abolish Frontex is a decentralized and autonomous network of at the moment some 130 groups and organizations from EU countries and beyond. The aim of Abolish Frontex is not to reform or improve EU border guard agency Frontex, or to replace it with more of the same. But rather to target the policies and system that keeps Frontex in place. Abolish Frontex is working towards ending the EU border regime, dismantling the border-industrial complex, and building a society where people are free to move and live.

We demand a world without borders, with freedom of movement for all and without organizations like the IND. Abolish the IND, Abolish Frontex!