9 June – Today we launched the ‘Abolish Frontex‘ campaign with a ‘life vests’ action and manifestation in front of the Huis van Europa, the official representation of the European Commission in the Netherlands, in The Hague. Some 30 people joined the protest, with speakers from SEHAQ (queer refugee group), Afrique-Europe-Interact and Stop the War on Migrants. 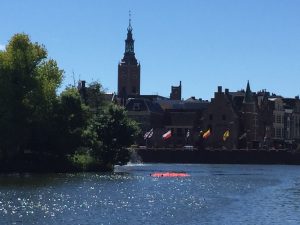 They talked about the expanding role of Frontex, the EU border guard agency, in EUrope’s deadly border regime, including its involvement in illegal pushbacks and violence against refugees at the external borders of the EU. And they asked attention for the increasingly militarized border policies of the EU and its member states, as well as the repression against refugees and solidarity activists. 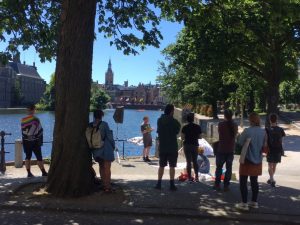 Meanwhile others put dozens of life jackets with a banner and alarms in the Hofvijver, symbolizing the plight of refugees and the many deaths amongst them while trying to cross the Mediterranean.

In six other countries (Austria, Belgium, Canary Islands, Germany, Morocco and Switzerland) the campaign was launched with actions as well. Over 50 organisations and groups have joined the campaign and released a joint open letter calling for an end to Frontex and to the EU’s militarised border regime. 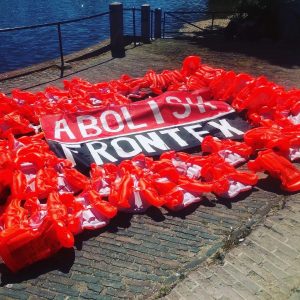 Keep an eye on our website and social media channels to stay up to date about the campaign and new actions. Want to join? Send a mail to stopthewaronmigrants[a]riseup.net