END_OF_DOCUMENT_TOKEN_TO_BE_REPLACED

Noise demo tonight: 20 hrs. at the headquarter of the police of The Hague (Patijnlaan 35)

Yesterday we took action at TU Delft Bedrijvendagen against the cooperation of the university with the big arms companies Airbus and Thales. TU Delft has been cooperating with Thales and Airbus on research and development of advanced military technology, such as radar systems and composites for military aircraft. Their products are being used in war-zones and by EU border guards, making the borders more and more deadly. They spend huge amounts of money to lobby the European Union to militarize its borders.

END_OF_DOCUMENT_TOKEN_TO_BE_REPLACED 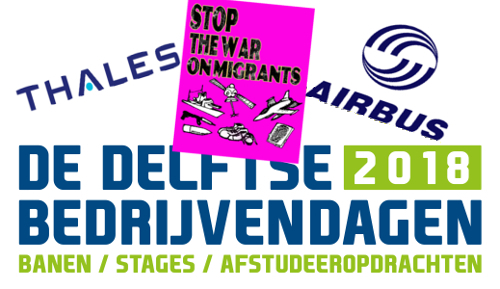 We are calling for a demonstration against the cooperation between universities and weapons companies. These companies profit from wars and the exploitation of migrants.

END_OF_DOCUMENT_TOKEN_TO_BE_REPLACED

The EU is waging a war against migration and the arms’ industry is profiting.

Migration is perceived as a security threat in which EU responds by militarizing border security, both at its borders but also intervening in third countries.

This include sending armed forces to the borders, erecting security fences (with all kinds of surveillance and detection technology), increasing use of autonomous systems (drones etc), use of military means by border police, (para)military Frontex operations in the Mediterranean, Operation Sophia before the coast of Libya, with support of NATO, and training and providing equipment to (para)military border guards in third countries.

The European military and security industry has been very influential in setting the discourse of a migration-security nexus and shaping the policies to their benefit.

Large arms and technology companies, in particular Airbus, Thales, Leonardo and Indra, as well as lobby organisations, such as the European Organisation for Security (EOS), are key players in this deadly ‘game’.
After influencing the market demand towards advanced borders’ security, these companies offer their products as a solution to stop migration flows, while previously have equipped the wars that created them in the first place.

Meanwhile, EU not only turns a blind eye to this process but also cooperates with, and thus legitimizes and strengthens, human-rights abusive regimes in third countries by combating migration.

Specifically speaking, in the last decade alone 80 billion euros of arms have been exported from EU countries to the Middle East and North Africa.
The Turkey deal led to the closure of the so-called Balkan route which forces refugees to go to Italy through Libya, resulting in more deaths in the Mediterranean.
At the same time EU feeds the rise of nationalism, racism, xenophobia and Islamophobia by depicting refugees as security threat.

During these info-talks we will delve into the parties who benefit from the further militarization of the EU borders, highlighting the necessity of a collective response. Together we aim to shape this response by shedding light to this inhumanity and forcing those responsible to pay for it.