A couple of weeks before the demonstration we organised a few info-talks to inform people about the “Stop the War on Migrants” campaign. The info-talks were held in social/political centers around the country, in collaboration with groups and individuals active in those centers. Specifically speaking we organised info-talks in Vrijplaats with Doorbraak and Darfur Union in Leiden, in Antifa Cafe in Utrecht, at the 2Dh.5 and Antifascist conferences, Nieuwland and Verrekijker in Amsterdam, in the Opstand in The Hague and in Nijmegen at the Mulawan migrant solidarity cafe.

The demonstration was publicly announced via our website, indymedia and facebook page as well as during the info-talks in various places.

A week before the demonstration we were contacted by the police (Ingrid Pieters BPM Operationeel Expert GGP | Wijk) and the facility management of TU Delft (Philippe van der Pal, Campus Facility Management, Proces Coördinator Catering, Events en Horeca) asking more information about the demonstration. We replied by confirming the demonstration and repeating the information that was already publicly announced. After the initial and all-included communication with the “authorities”, both TU Delft and police were asking for a phone number to contact us and talk more about it. We didn’t reply to this request since emailing is the communication channel we prefer for such an occasion. After that the police started bothering other groups and places where we had organised info-talks in the past, asking them if they are involved in the campaign. To make the oppression stronger, two policemen appeared in the social/political center of Nieuwland in Amsterdam where a preparation meeting was planned. They were holding the flyer of the campaign and were asking questions to a different group that was using the space at that time.

So to make things CLEAR, both TU Delft and the police were informed that we were going to stand outside the AULA conference center with banners and flyers to inform people about our campaign. There was no plan of disturbing the public order (e.g. the career fair process), no plan of disturbing the traffic (the location that we chose didn’t create any circulation obstacles neither to pedestrians nor vehicles) and of course no plan of endangering public health since people would approach us voluntarily without creating any stressful situations. In other words the demonstration was perfectly legal (according to their laws) which does not justify the intense oppression, intervention and intimidation by the police that followed. Once again we are being convinced that playing by the rules makes no difference to the police and the state as long as they have already stigmatised us as a threat.

From the start of the demonstration the police presence was overwhelming. Police patrolling around the campus, policemen and police vans outside the entrance of AULA center. Next to that, a lot of private security of the TU Delft, the private security firm G4S, was also present.

Police approaches a group of 4 sitting in a cafe close to the mathematics department (the location was indicated by security men from the campus). This group had earlier on entered the public AULA building but had left as soon as it became clear that they couldn’t visit the event. The police asks for their ID with the only justification that “they only want to know by name who takes part in the demonstration”. One of the people refuses to show their ID, since this is not a valid (and lawful) reason to request ID. None of the policemen claimed any kind of illegality taking place in that cafe (private property). The police immediately arrests the person who refused to give their ID – (more info on this case below).

At the same time, outside AULA center police was asking anyone that looked like they intend to take part in the demonstration for identification. After checking their IDs (taking pictures of their IDs) the police would inform people that if they don’t go to the designated-by-the-police demonstration area fifty meters removed from the entrance of the building, they would arrest them (threats and intimidation).

The cafe inside the AULA center was evacuated from the police with the explanation that “there is a demonstration going on outside”.

13:30 (starting time of the demonstration)

Two people with a banner were standing outside of the entrance of AULA without causing any kind of circulation disturbance – look map attached
More people gathered around the banner and some started flyering, informing people why we are here and about the campaign.
Immediately two policemen (one of them was a chief policeman from the Hague) approached one of the demonstrators holding the banner, shouting and threatening that if they don’t move in 5 min, they will arrest everybody. In the beginning the chief officer claimed that the demonstration was illegal and that’s why we had to leave. Later and after realising that he was being openly recorded he said that the police is there to “facilitate” the demonstration according to mayor’s orders and that we are “kindly” requested to move to the designated area for a better facilitation. When he was asked again if the demonstration was illegal, he denied it while at the same time another policeman gave a fine to one of the protesters because “they were participating in an illegal demonstration”.

After claiming the desired demonstration space for quite some time the police started putting pressure again on the demonstrators to move to the designated area. This time they would come with more definite orders and always with the threat that they will arrest everybody. At the same time they will repeat that the demonstration is NOT illegal, but they would arrest everybody for not following police orders (since they don’t move). A recorded conversation with the chief policeman follows:
police – “…but what’s the big deference if you stand here (preferred location) and not there (designated-by-the-police area)” – look map attached below.
protester – “Since there is no difference, why we can not stay here (preferred location)?”
police – “Because the designated area is where, we as facilitators (the police), think it’s best.” 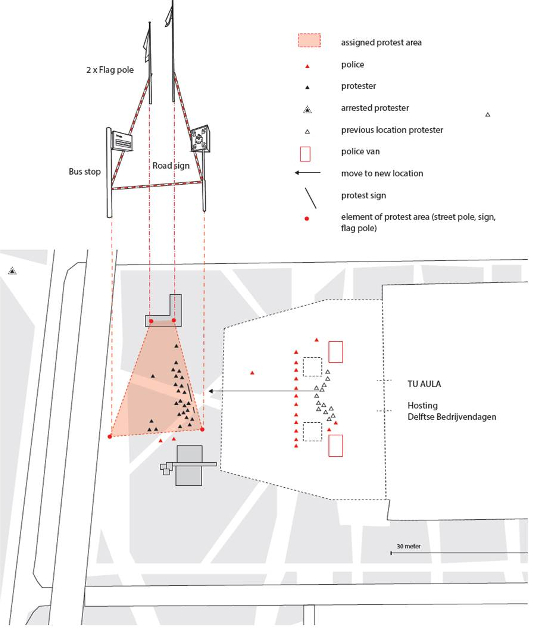 The police has had contact with the mayor and gives the demonstrators an official order to move to the ‘demonstration area’. If the demonstrators don’t comply, they will get arrested immediatly. Demonstrators move to the designated area, which is far away from the entrance and not clearly visible for people visiting the TU Delft Bedrijvendagen.

A spontaneous noise demo was organised to show our solidarity with the arrested commrade. After some time the protesters decided to leave voluntarily. The police immediately intervened and kettled the protesters. Same story again, police asking for IDs, police making clear that their intention is to file and stigmatise everyone that makes use of their right to demonstrate. According to the police “They don’t claim that the demonstration was illegal, they just want to know by name who took part in the noise demo” (there is recorded material about it). One of the people who refused to show their ID got arrested and released 2 hours later, remaining anonymous. The first arrested remains in prison for a second night.

The police set up a date for a court case for the first arrested on the 22/02/2018 at 15:00 with the accusation that “they didn’t comply to police request by not showing their ID when it was requested” – which is a felony (i.e. a crime), where the arrested was originally charged with a misdemeanor for ‘not showing ID’. Of course this accusation was ridiculous since the arrested was making use of their right not to show their ID as long as they were not involved in anything “illegal” and at the same time highlighting the abusive police tactics to discriminate and file everyone that makes use of their right to demonstrate. Of course this case would have been so embarrassing for the police that they had to drop it at 13:00, after having already transferred the arrested to the court room trying to put the maximum pressure and after asking for a last time their ID, they released them. The arrested was released without any charges and remaining anonymous.

*THE END* or just the beginning!

Opression will only make us stronger!